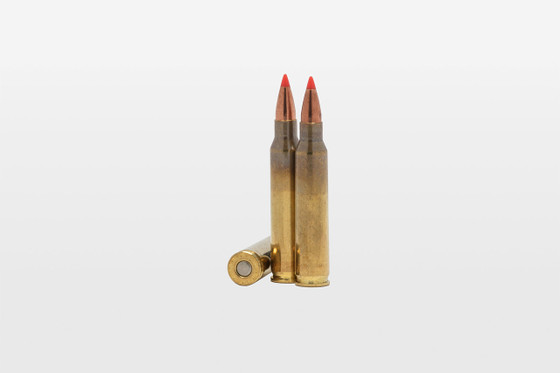 Loaded with the 55GR V-Max bullet, this ammo is designed to shoot a minute of angle for rifles chambered in 5.56 . Average Muzzle Velocity: 2900 FPS± through a 20 inch barrel USE/SPORT: 3-Gun Competition and Hunting

The .223 Remington and 5.56x45 NATO cartridges are very similar, and externally appear the same. The differences lie beneath the surface.

The 5.56 case has thicker walls to handle higher pressures, meaning the interior volume of the case is smaller than that of a .223. This will alter the loading data used when reloading 5.56 brass to .223 specs. Some 5.56 loads have a slightly longer overall length than commercial .223 loads.

The significant difference between the .223 Rem and 5.56 NATO lies in the rifles, rather than the cartridges themselves. Both the .223 and 5.56 rounds will chamber in the rifles designed for either cartridge, but the critical component, leade, will be different in each rifle. The leade is the area of the barrel in front of the chamber prior to where the rifling begins. This is where the loaded bullet is located when a cartridge is chambered. The leade is frequently called the “throat.”

On a .223 Remington spec rifle, the leade will be 0.085”. This is the standard described by the Sporting Arms and Ammunition Manufacturers’ Institute, Inc. (SAMMI). The leade in a 5.56 NATO spec rifle is 0.162”, or almost double the leade of the .223 chambers.

A shorter leade in a SAAMI spec rifle creates a situation where the bullet, in a 5.56 NATO round, when chambered, can contact the rifling prior to being fired. By having contact with the rifling prematurely (at the moment of firing), chamber pressure can be dramatically increased, creating the danger of a ruptured case of other cartridge,/gun failure.

The reverse situation, a .223 Rem round in a 5.56 NATO gun, isn’t dangerous. The leade is longer, so a slight loss in velocity and accuracy may be experienced, but there is not a danger of increased pressures and subsequent catastrophic failure.

This product hasn't received any reviews yet. Be the first to review this product!